Creating societies where every person has the same opportunity to fulfil their potential in life irrespective of socioeconomic background would not only bring huge societal benefits in the form of reduced inequalities and healthier, more fulfilled lives, it would also boost economic growth by hundreds of billions of dollars a year.

The report measures 82 economies against five key dimensions, distributed over 10 pillars, that are necessary for creating social mobility.

A common theme in the report is that few economies have adequate conditions to foster social mobility. As a consequence, inequality has become entrenched and is likely to worsen amidst an era of technological change and efforts towards a green transition.

The report identifies four key areas among the 10 pillars where progress – across both developed and emerging economies – is particularly lagging.

“The social and economic consequences of inequality are profound and far-reaching: a growing sense of unfairness, precarity, perceived loss of identity and dignity, weakening social fabric, eroding trust in institutions, disenchantment with political processes, and an erosion of the social contract. The response by business and government must include a concerted effort to create new pathways to socioeconomic mobility, ensuring everyone has fair opportunities for success,” said Klaus Schwab, Founder and Executive Chairman of the World Economic Forum.

The economic return from lifting social mobility across the board is considerable. According to the report, if economies were able to improve their social mobility score by 10 points, GDP would increase by 4.4% by 2030 on top of the societal benefits such investments would bring.

Further, the report warns that while social mobility requires a new set of public investments, it is the mix and quality of investments that will make them effective and they must be paired with shifts in business practices.

Improving social mobility is a multistakeholder challenge, in which businesses must also take the lead by promoting a culture of:

The most socially mobile societies in the world, according to the report’s Global Social Mobility Index, are all European. In the inaugural year of the report, the Nordic nations hold the top five spots, led by Denmark in first place (scoring 85 points), followed by Norway, Finland and Sweden (all above 83 points) and Iceland (82 points). Rounding out the top 10 are the Netherlands (6th), Switzerland (7th), Austria (8th), Belgium (9th) and Luxembourg (10th). 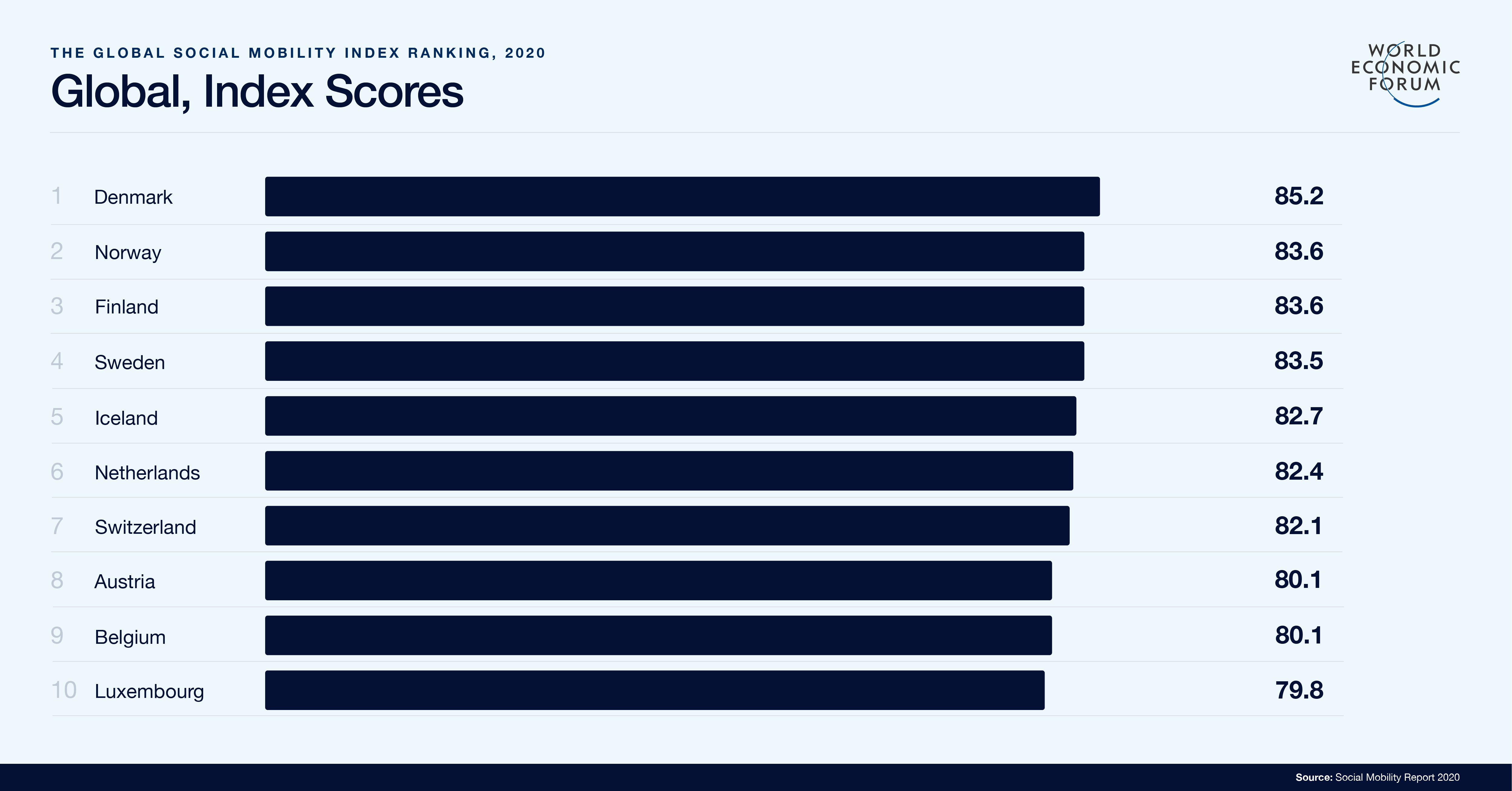 Among the G7 economies, Germany is the most socially mobile, ranking 11th with 78 points, followed by France in 12th position. Canada comes next (14th), followed by Japan (15th), the United Kingdom (21st), the United States (27th) and Italy (34th).

Among the world’s large emerging economies, the Russian Federation is the most socially mobile of the BRICS grouping, ranking 39th, with a score of 64 points. Next is China (45th), followed by Brazil (60th), India (76th) and South Africa (77th).

The report also examines which economies stand to gain the most from increases in social mobility. The economy with the most to gain is China, whose economy could grow by an extra $103 billion a year, or $1 trillion dollars over the decade. The US is the economy that would make the second-largest gains, at $87 billion a year. Next is India, followed by Japan, Germany, Russia, Indonesia, Brazil, the UK and France. Most importantly though, the returns are intangible in the form of social cohesion, stability and enhanced opportunity for more people to fulfil their potential. 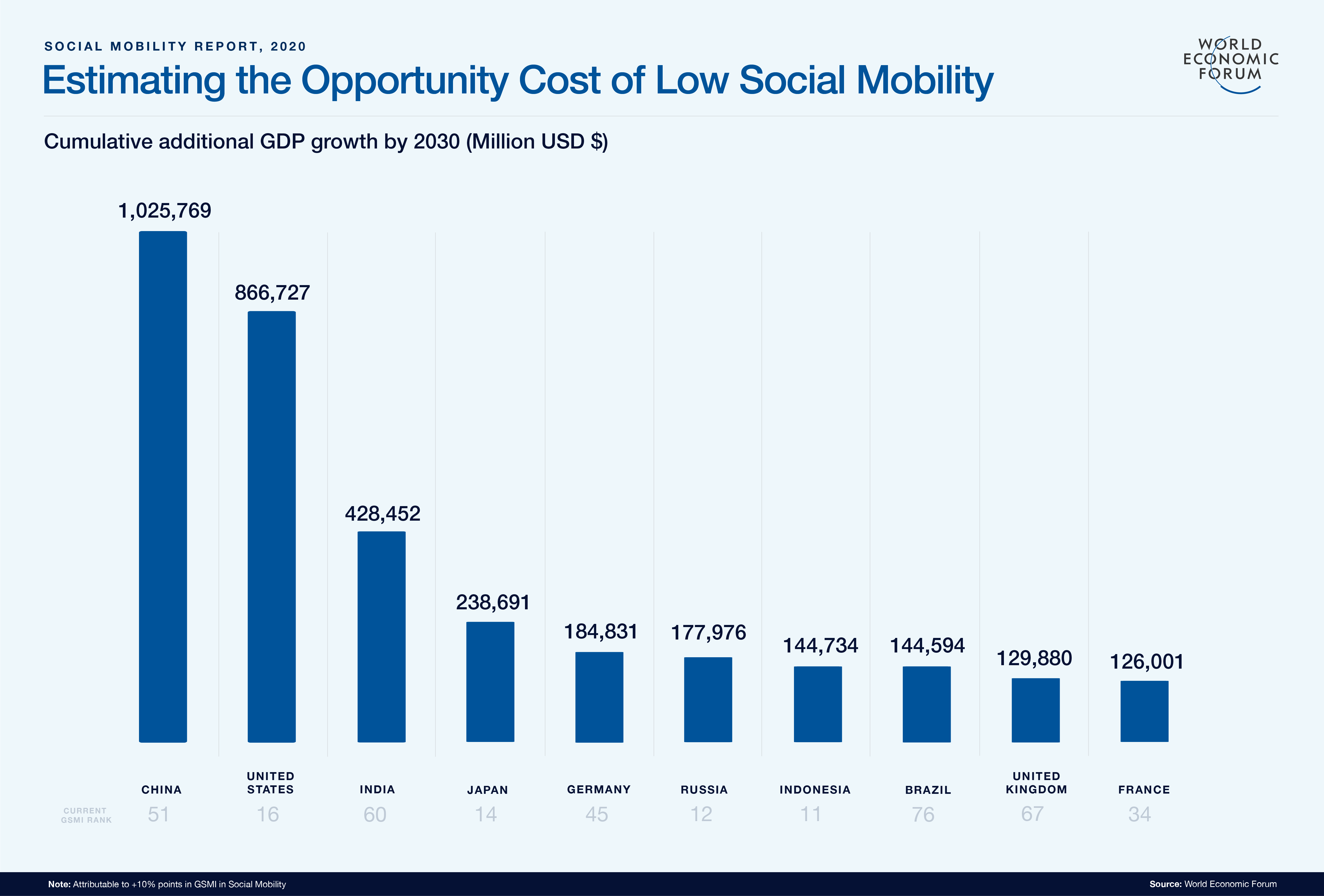 Fears about social mobility weigh heavy on the global public. According to a study conducted exclusively for the World Economic Forum by Ipsos, 44% of global respondents believe prospects for today’s youth in terms of being able to buy their own home will be worse than for their parents compared to only 40% that believe prospects will be better.

The survey also found that more people were pessimistic than optimistic for today’s youth compared to their parents when it comes to having a secure job, being able to live comfortably when they retire or being safe from crime or harm.

A call for stakeholder capitalism

The report makes a powerful case for stakeholder capitalism. The most socially mobile economies all share an emphasis on effective social policies that benefit communities as well as provide a platform for healthy, competitive economies. By comparison, economies that are organized more on “shareholder value maximization”, or “state capitalism”, tend to perform less well.

In order to optimize social mobility, the report calls for action in the following areas:

“Improving social mobility must be the fundamental imperative of this new decade: As long as an individual’s chances in life remain disproportionately influenced by their socioeconomic status at birth, inequalities will never be reduced. In a globalized world where there is transparent information on the gulf between the ‘haves and the ‘have-nots’, we will continue to see discontent, with far-reaching consequences for economic growth, the green transition, trade and geopolitics. Social mobility matters for building a fairer and more optimistic world, but it also matters because we won’t succeed in achieving other objectives without it,” said Saadia Zahidi, Managing Director, New Economy and Society, World Economic Forum.

Platform for Shaping the Future of the New Economy and Society

The Social Mobility Report is a new publication of the Forum’s Platform for Shaping the Future of the New Economy and Society. The platform aims to advance prosperous, inclusive and equitable economies and societies.

It focuses on three interconnected areas:

Over 100 of the world’s leading companies and 100 international, civil society and academic organizations currently work through the platform to promote new approaches to competitiveness in the Fourth Industrial Revolution economy; deploy education and skills for tomorrow’s workforce; build a new pro-worker and pro-business agenda for jobs; and integrate equality and inclusion into the new economy, aiming to reach 1 billion people with improved education, skills, jobs and economic opportunities by 2030.

Sector News
As students have returned to university, many have expressed concern

Sector News
Secretary of State @GavinWilliamson addresses the House regarding the