£4.8 billion Levelling Up Fund will be extended to the whole of the UK to help boost growth in Scotland, Wales and Northern Ireland

£4.8 billion will now be invested in local projects, such as regeneration and transport, ensuring the government provides the same support to communities across the UK as we build back better from Covid.

A multibillion-pound fund to level-up opportunities is being extended so that people in every region and nation of the UK can benefit, it was announced today (24 Feb). Taking this UK-wide approach makes sure that the UK Government can target funding more efficiently and responsibly between different parts of the country.

Chief Secretary to the Treasury, Stephen Barclay, said that communities in Scotland, Wales and Northern Ireland will now all benefit from at least £800 million of investment by the UK Government for town centre and high street regeneration, local transport, cultural and heritage projects.

The Levelling Up Fund, which was announced at the 2020 Spending Review, will invest in local infrastructure that has a visible impact on people and their communities. It will run from 2021/22 to 2024/25, and drive regeneration in places in need, those facing particular challenges, and areas that have received less government investment in recent years. Because such places exist across the UK - including in Scotland, Wales and Northern Ireland - this support is being extended across the whole of the United Kingdom.

The initial £4 billion  will now be made £4.8 billion as the scheme becomes UK-wide. Making the Levelling Up Fund UK-wide will enable the government to provide the same support to communities in all parts of the UK as we build back better from Covid.

“We are committed to levelling-up opportunities right across the United Kingdom so that all communities can benefit from our future prosperity.

“Our levelling-up fund will back local projects to improve everyday life for millions of people and we look forward to working with all areas to boost local economies.

“By extending the levelling-up fund to be UK-wide, we are ensuring that no community in the United Kingdom is left behind.”

Making the Levelling Up Fund UK-wide will enable the government to provide the same support to communities in all parts of the UK as we build back better from Covid and to take a strategic approach across the whole of the UK, allocating funding in all parts of the country irrespective of administrative borders. Along with the government’s plans for the UK Shared Prosperity Fund, the Levelling Up Fund will ensure a package of UK Government support which invests in skills, infrastructure and innovation at local, regional and national levels.

"The new UK Levelling Up Fund is a fantastic example of the UK Government delivering for people in Scotland. It will provide a boost to communities right across Scotland as we set out to Build Back Better from the Covid pandemic.

"This fund will allow us to directly invest in capital projects in Scotland. I look forward to working on the delivery of the fund in Scotland and with local authorities, who know best what their communities really need.

"The new UK Levelling Up Fund is just one way the UK Government is investing in Scottish jobs and Scotland’s future prosperity. We are driving a package of measures to level up opportunity across all parts of the UK, including City and Region Growth Deals, Freeports, the Union Connectivity Review, and preparing for a new UK Shared Prosperity Fund.”

“This represents a significant investment in Wales and is testament to our determination to level up the whole of the UK.

“The UK Government has supported hundreds of thousands of people and businesses in Wales through the pandemic. As we begin our programme to build back better we will target investment where it is needed most, directly benefitting communities across Wales.”

Further details on how the Fund will operate will be published in the prospectus at Budget – including who can bid, the types of projects eligible for funding, and the criteria for assessing proposals.

The UK Government will use the financial assistance power in the UK Internal Market Act to ensure the fund is UK-wide.  Due to this, the initial £4 billion fund will now be made £4.8 billion available UK-wide.

The Levelling Up Fund will supersede existing local growth funding streams, such as the Local Growth Fund, Pinch Points Fund, and future rounds of the Towns Fund – working directly with local areas across the UK to take a holistic approach to their needs.

Since 2015, the UK government has invested billions in local growth funding including:

Supporting jobs and investment in local areas, helping people feel better off, by:

What is the National Infrastructure Strategy?

What is a UK infrastructure bank?

Changing the way that government delivers for local areas by:

Helping towns and cities to thrive by:

What is the Levelling Up Fund?

What is the UK Shared Prosperity Fund?

This is a long-term ongoing priority and we will continue to revisit it at every future Budget and Spending Review until we deliver on this promise. 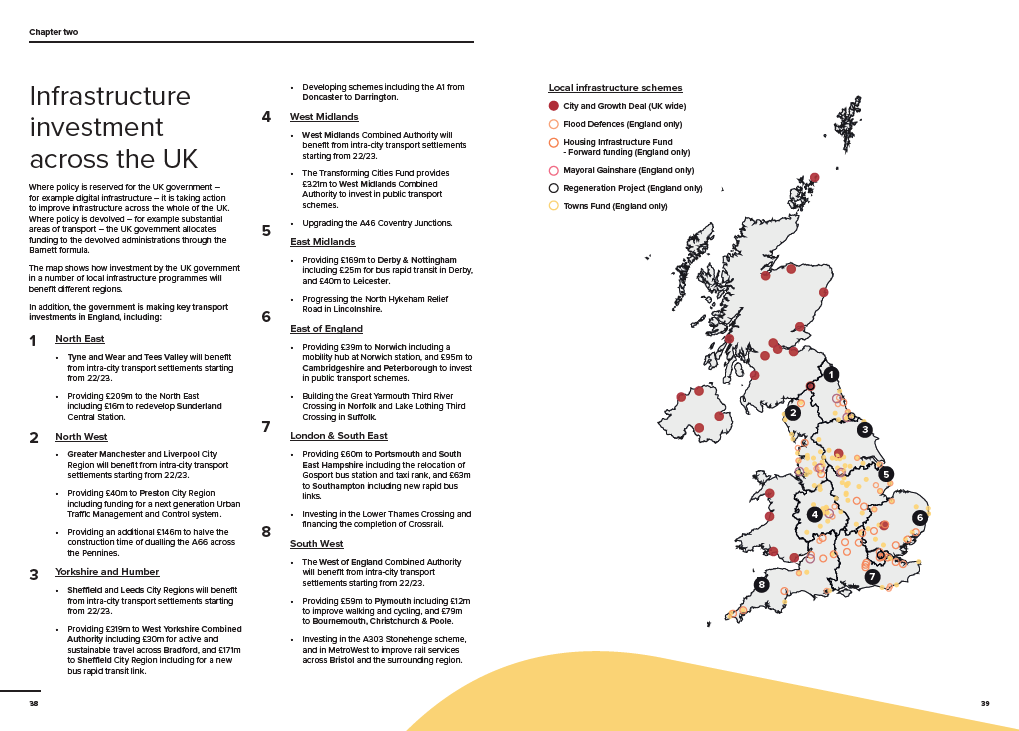 The National Infrastructure Strategy sets out plans to transform UK infrastructure in order to level up the country, strengthen the Union and achieve net zero emissions by 2050.

Response to the National Infrastructure Assessment

Response to the Regulation Study: Strategic Investment and Public Confidence

The National Infrastructure Strategy sets out the government’s plans to transform the UK’s infrastructure networks. It is based around three central objectives: economic recovery; levelling up and strengthening the Union; and meeting the UK’s net zero emissions target by 2050. This will be enabled by clear support for private investment and through a comprehensive set of reforms to the way infrastructure is delivered.

Sector News
The past year has seen us become more isolated than ever before. With

Sector News
It’s been quite the year for everyone, and while things are beginnin

Sector News
Scores of student innovators, alumni and researchers from Imperial hav

The self-assessment process is, further, the key way in which providers can measure the effectiveness of their provision against the EIF. Under the...

A provider’s Designated Safeguarding Lead (DSL) plays a critical role in its approach to safeguarding its learners, training its staff, providing...